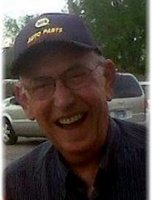 It is with deep sadness that we announce the passing of Garnet on January 19th, 2018. Garnet was proud to be a member of the community of farmers who call Boxall home. Garnet lived his entire life on the family farm at R.R.#1, Port Stanley. Garnet’s life was one of hard work, steadfastness and honesty. His loss is deeply felt by his farming partner and brother, John. Garnet is survived by his siblings Carol (late Blake) Rieger, Ron (Joanne) Stinson, Cathy (George) Knight, John (Chris) Stinson and Jim (Terri) Stinson. He is predeceased by his parents Goldie and Ada Stinson and brother Grant (late Eve) Stinson. Garnet is also survived by many nieces, nephews, great nieces and great nephews. Garnet’s humbleness is echoed in his wish that there be no funeral or visitation. Please consider a donation to the STEGH Foundation (AMU 4th Floor) in his memory, (ItsOURHospital.ca). Arrangements entrusted to ST. THOMAS-ELGIN CREMATION, www.stthomaselgincremation.com.